This year was a bit different. I left Square in February after seven years, without much of a plan for what came next. Below are some excerpts from the end of year review I did with myself. I’ve left out some of the stuff around bigger life, relationship, and work goals since they are still forming.

I wasn’t planning to do any work, but ended up taking on a good selection of projects mostly towards the end of the year. This included some teaching, 1:1 coaching, “acting CTO” roles, various other management consulting, and some programming. The latter was surprising to me, I almost declined it—I haven’t been paid to code in 6 years—but decided to give it a crack to see if I’m still interested in it. Yes, as it turns out. I didn’t do any prospecting: all of these gigs came to me through my network and referrals.

Throughout the year, I had about 10 distinct clients, billed around 600 hours (15 weeks), and brought in around $US110K—some equity, mostly cash. My effective rate varied pretty significantly, from free/reduced to $US750/hr depending on project. I was generally about 60-65% loaded from July on a 40 hour week, with a spike up to 120% for a couple of weeks when I accidentally said yes to too many things.

I enjoyed trying many smaller projects, rather than committing to one big thing.

I had three daily habits this year, and I stuck to all of them, with the planned exception of the week when I was backpacking:

The latter two don’t make me any stronger (you need periodization for that), but I do them for maintenance and mental discipline.

This year also marked a full decade of veganism without me noticing. It’s not something I have to think much about anymore. It’s amazing how much more mainstream it is these days.

At the start of the year we had grand plans for an epic US road-trip, Alaska to Mexico. That didn’t happen: when it came to the actual logistics it didn’t seem as fun as when it was still a dream. Instead, I spent a lot of time within California mostly on summer running adventures with GGRC:

To finish the year, Ash organised a 10-day epic cycling trip to Mallorca, Barcelona and Girona in Spain. I was wholly unprepared for this physically and was by far the worst cyclist on the trip, but still had a great time.

2017 was plagued with injury, so my goal for this year was primarily to be more sensible and stay healthy. For the most part, I was successful. 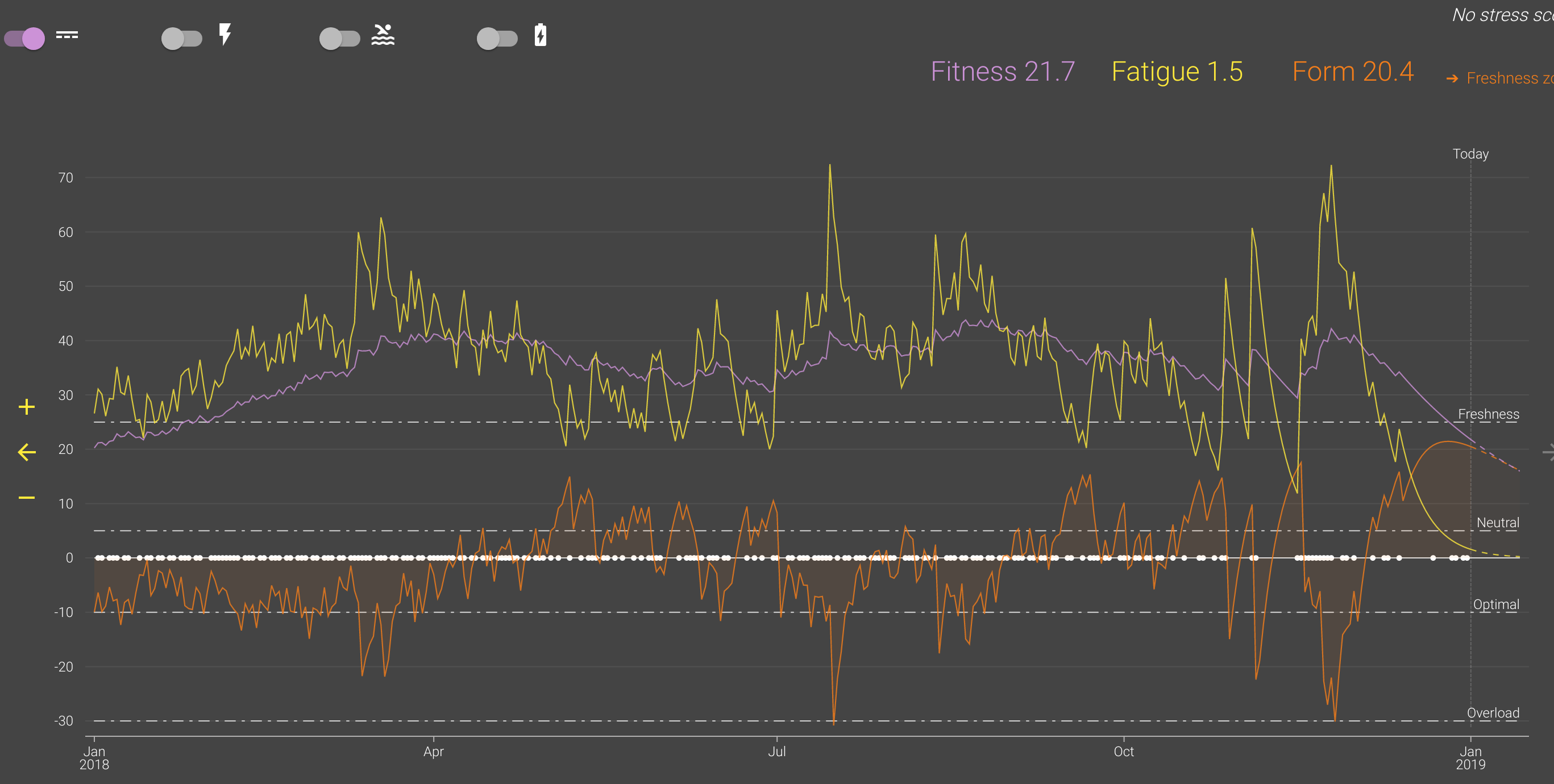 Fitness vs. Fatigue over the year. Form is the difference. Note the relative consistency in the first quarter of the year.

I started the year with an “easy” training cycle, targeting a 90 minute half marathon at Avenue of the Giants with Brent. This went very well. My training was consistent and I hit the goal.

After a couple of weeks off I wanted to start another cycle, but was struggling with a flu-type thing for a week. Then every weekend in June was a long weekend away (above), so although I mostly hit my mileage, it was mostly all trails and not a lot of quality road training. Hiking also took a week and a half out of training, from the hike itself and then a few days after coping with some excessive blisters. Overall this cycle was much more inconsistent, though I was still feeling strong going into the Alameda Half mid-September. Unfortunately it was my first ever DNF. Something was wrong with my foot and I had to pull out after 30 minutes despite everything else feeling great.

I took the next two weeks pretty easy then had another crack at the Tiburon Half. This was much hillier race, but I’m very happy with my performance. I should have ended the season there, but given how good a shape I was in I was hoping to get a PR this season so set my eyes on Healdsburg at the end of October. I was just trying to do maintenance runs rather than train, but mid-October my foot played up again more seriously and thus ended my running season.

I was supposed to switch to the bike after Alameda to train for the Spain trip in November. Instead, I kept running for an extra month, got injured, then the smoke hit SF and kept me inside. As a result, this happened:

The bottom four rides were the extent of my training, an already too short preparation cut shorter by the smoke at the beginning of November. The top two weeks represents far too much time on the bike for my fitness level, and I was still cutting rides short and taking rest days. I’m lucky I didn’t get more seriously beat up. Overall it was fun, but certainly doesn’t qualify as sensible.

I was able to take most of December off, and have only now just started running base mileage again.

Given I missed my second target race I had been feeling pretty down about the year, but in hindsight it went pretty well. I had 10-11 months of injury free running and cycling, PR’ed my mile (5:34) and 5K (18:16), while getting in some phenomenal destination runs and rides.

This year I also finished up my third and final year as coach for the Golden Gate Running Club. Time for some fresh ideas. Am looking forward to see what Will brings to the position!

I didn’t consciously practice anything consistently this year, but did try a few new things near the beginning. Projects mostly fell off in the back half of the year as work picked up.

For running, I want to be smarter about my training rather than doing it primarily by feel. I’m going to experiment with using an online coach, and try using an Oura ring to better track recovery. I want to run faster through consistent training and avoiding injury.

Project wise I don’t have any plans. Am happy to see what happens. I’d like to try streaming more, particularly programming. I’ve only done a little of this and found it enjoyable.