Having visited Yosemite a number of times, this season I decided to head south and check out Kings Canyon National Park. Play along at home with this CalTopo map.

Drove from San Francisco at sunrise to arrive at Road’s End Permit Station in about 5 hours. On advice of the ranger, planned to enter via Copper Creek and head in an 120K clockwise loop, coming back down on the John Muir Trail. “Oh you’re heading out today?” she asked as I grabbed my pack. I wish I’d heard the subtext.

Looking back down the canyon.

Copper Creek destroyed me. A brutal 6 hour climb, during which I couldn’t get sufficient calories down nor keep my heart rate under control. There’s no water on the top half and I had to start rationing, leaving me dehydrated. I set up camp at the first flat section after summitting, an hour from sunset, still not sure where the next creek was. (This was probably too early than technically allowed.)

Was barely able to get through half my dinner. Felt terrible.

Didn’t sleep well. Not enough water for a cooked breakfast, I headed out immediately. Thankfully found water after about an hour. Took a short detour in to Granite Lake to have a real breakfast and recover for a bit. Even so was still pretty grumpy. Decided to hike until lunch and make a decision about whether to keep going.

A morning hiking didn’t improve my mood, so decided to loop around counter-clockwise via Kennedy Pass instead of my initial plan. This would be a shorter loop, but I figured I could tack alternative trails on afterward if I felt like it. 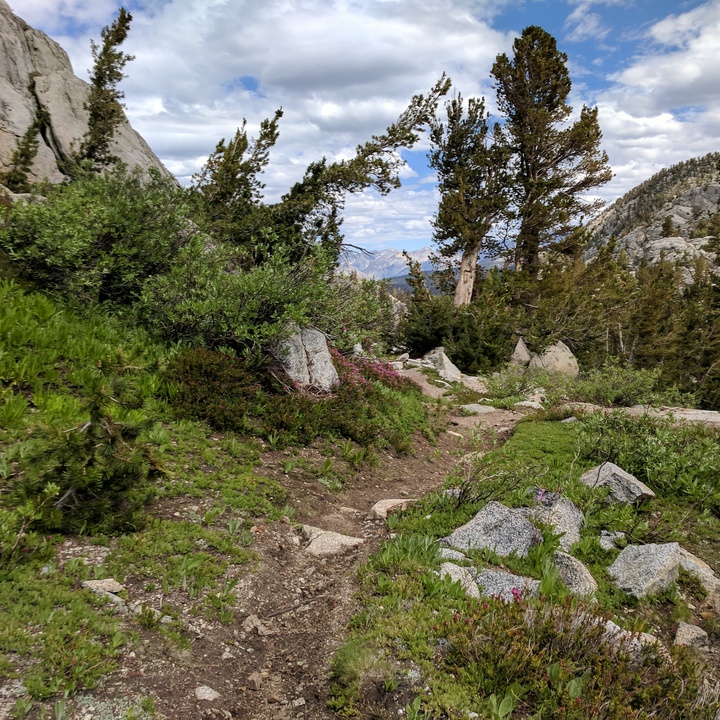 The trail towards Granite Pass.

Unfortunately I didn’t notice the trail to Kennedy Pass was unmaintained. I was following cairns for a while but eventually it became too eroded and covered by fallen trees that I wasn’t ablet to follow it. Went off trail for a bit and was tricked by the sound of water that I though was Kennedy Canyon. Should have double checked my compass.

Ran out of daylight to continue searching, so once again set up camp on the only flat section I could find, not close to a water source, not 100% sure where I was. Another stressful day.

I resolved that today was going to be a stress free day. Step 1: find the trail again. Not long after starting out I remembered my watch had some navigation features. I opened it up to save my position in case I got lost, so that I wouldn’t end up going in circles, and noticed the built-in map had the trail marked on it! It was in the direction I was going, and it wasn’t long before I spotted a cairn.

At this point I was concious of water. In my memory the last creek was back over the hill and it was getting quite hot. The trail ahead was unknown, assuming I could even follow it, but presumably Kennedy Creek would provide. After two stressful days, in what was supposed to be a relaxing vacation, I decided to turn back and camp at Granite Lake (where I’d had breakfast the day before). 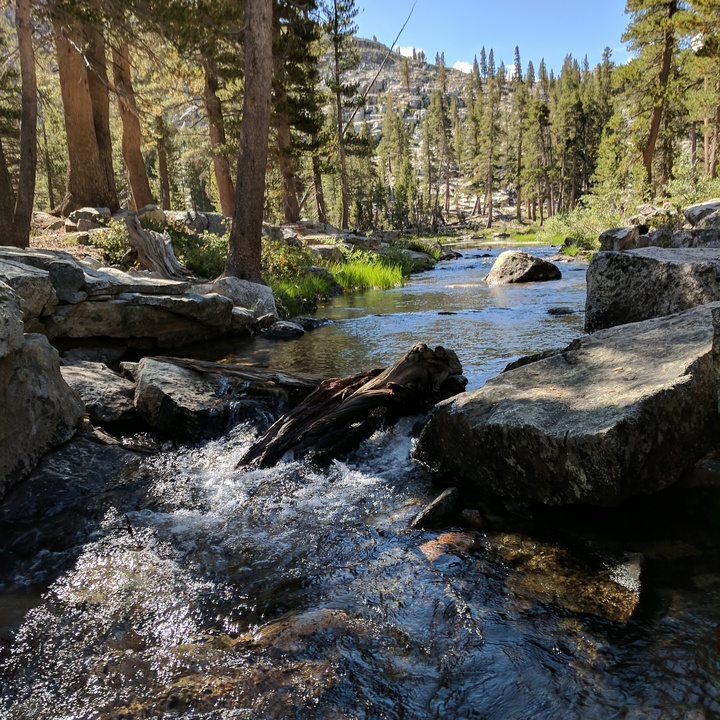 I ate lunch here and it was glorius.

Coming over Granite Pass I walked right into an epic thunderstorm. It just kept rolling! Also hail. Gave me a chance to try out my rain gear, and it worked a treat. Kept me dry, not too warm to hike in. I arrived at the lake for a late lunch, then wiled away the afternoon doing nothing in particular. Overall a much better day.

Up before sunrise to try and exit by lunch. My left knee was playing up so the big descent down Copper Creek was a little rough, but I managed to get back to the car in about four hours and was happy to be done. On the drive out I stopped at the General Grant Tree grove and it was unexpectedly a highlight. Those Seqoias are massive. 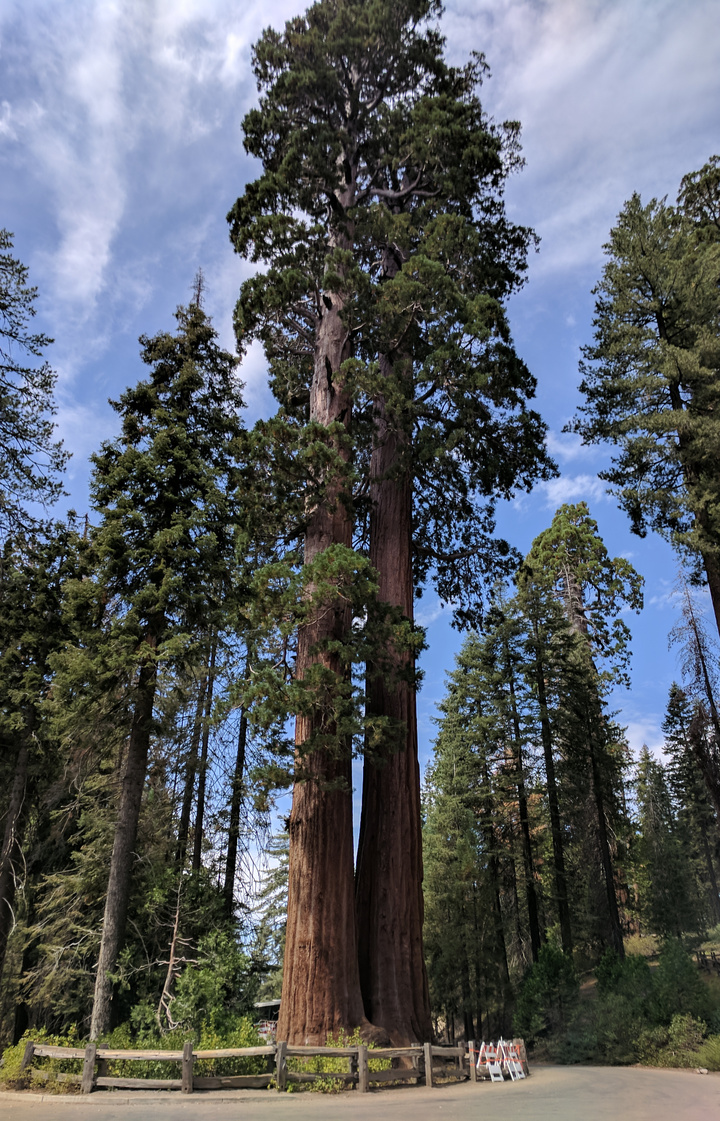 Imagine the biggest tree you can think of. Bigger than that.

Overall not the big hike I planned, but still some good time spent outside. 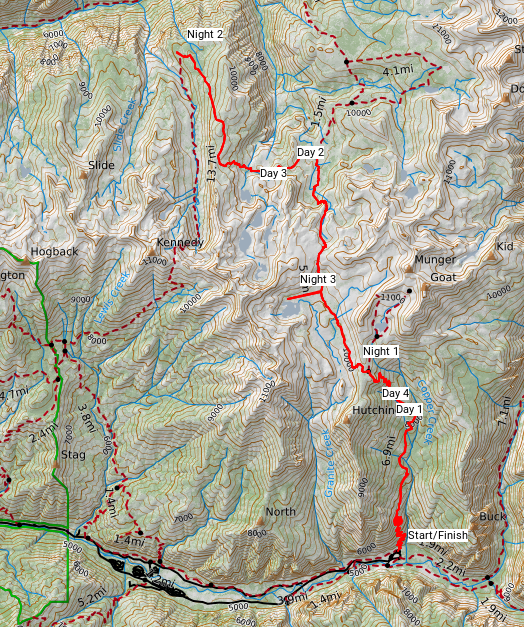 I carried mostly the same set as my Yosemite Trip.

New on this trip was the BV500 bear cannister I was envious of last year, and I enjoyed it much better than the rented ones. Easier to find things through see-through walls, slightly bigger, can be opened without a tool.

I was trying some Hoka Speed Instinct shoes, hoping they’d keep my feet comfortable longer. They did not. They also stayed wet longer and smelled terrible. I’ll be reverting back to the Salomons once they are ready for replacement.

It wasn’t intentional, the the fenix 5X watch I bought recently turned out to be pretty cool. Aside from the navigation features (good complement to a map and compass), the heart rate monitor was neat and the step/stair goals were good for a laugh: 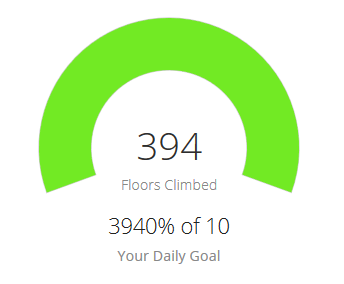 Damn straight I hit my goal.

For the first time I now have a phone that can take decent pictures (Google Pixel), so I tried doing that. Probably won’t become a habit, but for the first time in one these reports the pictures were actually taken by me!

I switched out my hat for a Tuga cap and loved it. Much better without the rigid back.

The Vapur 1L used on my last trip has gone missing so I took two 750ml ones we had lying around. They weren’t big enough to fit between the two side straps of my pack, so ended up flopping around alot. Will be reverting back to the 1L as soon as I can find it.

One more panorama for you.