Why Honor Matters by Tammler Sommers was the most fascinating book I read this year. Literally thought provoking. It contrasts traditional western liberal philosophic ethic, which the author labels dignity, with the much maligned/ignored ethic of honor. Tammler argues that we should reintroduce “constrained” forms of the honor ethic to various domains. He is acutely aware of the large potential issues with unconstrained honor systems—excessive retribution, subjugation and killing of women—and so throughout is very careful to keep this foremost in the discussion and to emphasize that the “constrained” modifier is critical. Overall, he’s looking to see how we could turn the dial towards honor, rather than flip the switch.

Well-contained honor-oriented approaches may have inherent defects, yet still be morally preferable by a mile to systematic and idealized approaches that could achieve perfection “in principle.” The old saying “Don’t let the perfect get in the way of the good” is worth taking very seriously here. If we allow honor to work its magic, while limiting its excesses, we can make actual rather than theoretical progress.

This book gave me a richer understanding of some issues I’ve wrestled with around ethical altruism, violence, and justice. 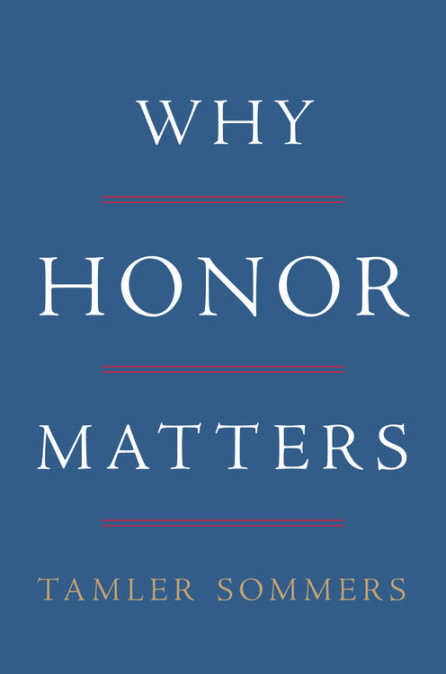 Singer’s argument (that underpins much ethical altruism) that there isn’t a moral difference between saving the life of a drowning child, and saving the life of a starving one half way around the world, has never resonated with me emotionally despite intellectually trying to support it. This dissonance has been … uncomfortable. Sommers identifies this kind of issue as a fundamental lack:

Dignity can’t support “us against the world” because it sees no division between “us” and the “world.” Dignity’s slogan is “We are the world”—which sounds nice in principle but can be isolating in practice. Individuals can truly belong to a family, sports team, gang, class, or school group. But the “human family”? It’s difficult, maybe impossible, to feel connected to something as massive as all of humanity except in the most abstract and metaphorical manner.

Is violence ever acceptable? When? This was particularly topical in light of anti-fascist violence earlier this year.

Dignity doesn’t have much to recommend for the oppressed. Dignity is passive; it tells us to respect others and not to violate their rights. Okay, but how should we respond when our rights are violated? On that question, dignity is silent, and honor has a lot to say. Honor says, “You should be prepared to fight and even to die to preserve your self-respect and the respect of others in your group.”

He forwards an idea (which I haven’t fully processed) that conflict is actually necessary for a connected society:

It may sound paradoxical, but today we place too much value on our own lives. Threats to physical safety, no matter how infinitesimal, have come to trump all other concerns, moral and otherwise. This obsession with risk is antithetical to honor, which places supreme importance on courage and being faithful to your group’s principles. […] Excessive aversion to violence has produced ineffective zero-tolerance policies, the school-to-prison pipeline, a massive police state, and the largest prison system in human history.

[C]onflicts—both violent and nonviolent—are important for maintaining relationships in an increasingly segmented society. Conflicts provide opportunities for active participation and engagement with other human beings. They reconnect us with others, allowing individuals and communities to discover who they are, what they’re made of, what they believe and feel. Honor-based conflict without insults leads to greater cooperation. As Nils Christie puts it, “Conflicts might kill, but too little of them might paralyze.” It’s impossible to completely eliminate violence without also reducing productive community-building conflict.”

This book also introduced me to a critique of the US justice system, in particular around the idea that having the state handle justice without any regards for victims is a problem:

Defenders of the status quo often assume that punishing wrongdoers automatically restores the self-respect of victims by sending a message to the offender that the victim is a person whose rights cannot be violated. But this is a rationalist fantasy with no basis in real human psychology.

… and also provides an overview of a proposed solution “restorative justice” that involves the victims:

The results of a recent Canadian survey indicate that 89 percent of violent crime victims wanted to meet the offenders. Even in what seems like the most problematic type of crime—sexual assault—victims report positive effects from meeting with offenders. Victims who participated in restorative conferences showed a decrease in PTSD symptoms. Survivors reported that the “experience was empowering rather than traumatizing.” In another recent study, 70 percent of rape survivors reported that they would welcome the opportunity for victims to be able to meet with their offenders in conference settings.

We cede the role of punisher to the state in large part to prevent victim retaliation and vigilantism. But we don’t do this for reasons involving justice. We do it for practical reasons—to prevent escalating feuds and to limit collateral damage.

I particularly liked this chapter: providing practical examples of how reintroducing some ethic on honor could actually make a difference, grounded in actual examples, while constraining it to mitigate downsides. I was worried about potential issues of discrimination, but then so is the author:

At this stage, the worries about racial bias are purely speculative. Restorative justice is a recent movement, and more empirical work needs to be done to gauge the effects of racial bias on restorative processes. But given the systematic and structural biases that infect our current disciplinary practices, it would be difficult for restorative justice to fare any worse.

The author also provides example of dramatic decreases in gun violence from approaches founded on a constrained honor ethic.

At times I don’t feel the author did a great job of “re-express[ing] your target’s position so clearly, vividly, and fairly that your target says, “Thanks, I wish I’d thought of putting it that way.” when talking about dignity. But given how familiar I (and presumably you, given how pervasive it is) are already with the concept I was able to read through it. I am sure that better critiques of the ideas in this book exist than the author presents, but that doesn’t detract from the book. It has given me fuel for thought, not a stone tablet.

Like the The Righteous Mind this book has given me new ideas to help understand and interpret the world. Highly recommended.