Reinventing Organizations by Frederic Laloux is the most important management book I’ve read in the last year. It is a survey of practices from 100+ person companies across many industries that have done away with traditional management structures and are instead self-managed. I liked that this book generally wasn’t prescriptive. It presented a variety of processes: some resonated with me, some very much did not. 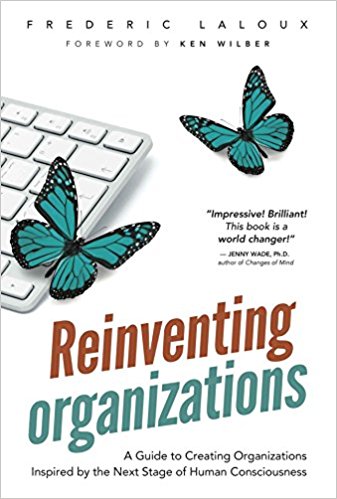 In my management experiences I always felt I was searching in the dark for ways to make work less alienating. This book shined a light.

Hierarchical structures with non-hierarchical cultures—it’s easy to see that the two go together like oil and water. That is why leaders in these companies insist that culture needs constant attention and continuous investment. In a hierarchical structure that gives managers power over their subordinates, a constant investment of energy is required to keep managers from using that power in hierarchical ways. Stop investing in culture, and the structurally embedded hierarchy is likely to take the upper hand.

Going in to this book I had three primary questions:

“We aim to make money without knowing how we do it, as opposed to the old way of losing money knowing exactly how we lose it.”

Many of the companies surveyed weren’t just successful—they were industry leaders. Buurtzorg in the Netherlands has grown to 14,000 employees in 10 years and continues to grow. FAVI, a car parts manufacturer, is the only manufacturer left in their region and turned a profit through the crashes of 2008 and 2012 while avoiding layoffs. Since the book was published we have more examples such as Zappos and Medium.

Is it possible that these organizations would be more effective with a traditional management structure? Perhaps in some cases (AES/Zappos/Medium?), very unlikely in others (Buurtzorg/FAVI?), but this question sets a needlessly high bar. Given the potential human benefits, and creation of a space where people can bring their full selves and creativity to work, I’m mostly interested in whether self-management can be viable.

This approach of results-without-knowing-it reminds me of the illegible/legible dichotomy from Seeing Like A State. By making success legible to certain measures, it’s dangerously easy to extinguish the hidden components of that success.

In addition to top line revenue and growth, some of this success can be attributed to lower costs. Self-organizing companies keep their functional units as small as possible, preferring wherever feasible to have responsibilities handled within teams themselves. This makes no sense from a hard economic perspective but the companies found “the economies of scale and skill resulting from staff functions are often outweighed by the diseconomies of motivation produced.” In other words, having teams be responsible for typical support functions such as budgeting, training, and procurement enabled teams to feel strong ownership over their results.

Further, companies were able to temporarily scale down costs in economic downturns. FAVI collectively decided to work less and take a pay cut rather than layoffs, which enabled them to keep their group cohesion and accelerate out of the downturn once it reversed.

When anyone can make a decision, having a decision making process is critical. The “advice process” was common across many surveyed companies, and it was simple: you can make any decision you want, so long as you sufficiently consult affected people. Bypassing this process was treated as a cardinal sin.

This is not a consensus process. Not everyone consulted needs to buy in. People making decisions in this way feel a deep responsibility to ensuring that it continues to be the right one, while people who disagree feel a responsibility to hold them accountable.

This is not sufficient for a cohesive strategy though. For that, companies developed practices to ensure everyone was tapping into the “organizational consciousness” and aligned on where it wanted to go. These ranged widely from vibrant internal blogs to intensive group therapy. In all cases though, there was a commitment to participation in these processes.

In rare cases, founders decided to suspend the advice process in times of crisis. When this happened, two guidelines seemed to minimize the cultural impact of this:

Give full transparency about the scope and time frame of top-down decision-making, and appoint someone to make those decisions who will not be suspected of continuing to exert such powers when the crisis is over.

Dealing with conflict resolution was reported by all organizations as the top issue that needed to be directly addressed through training and continual support.

In a typical hierarchy we sweep much of this under the rug by mediating through managers. Take for example a typical “360 degree” feedback process, where peers and subordinates submit feedback anonymously to a person’s manager. The manager then anonymizes, synthesizes, and delivers it. In an organization without managers, critical feedback needs to be delivered directly, and therefore everyone is required to have the skills and support to be able to do so.

In traditional companies, when one person doesn’t deliver, colleagues grumble and complain but leave it to the person’s boss to do something about it. In self-managing organizations, people have to step up and confront colleagues who fail to uphold their commitments. Morning Star and other self-managing organizations readily admit that this essential piece can be tricky to put in place and to maintain. The process is effective to the degree that there is a culture within the workplace where people feel safe and encouraged to hold each other to account, and people have the skills and processes to work through disagreements with maturity and grace.

Though used rarely, processes were also adopted for escalations:

At Buurtzorg, when one person has lost the trust of the team, the team tries to find a mutually agreeable solution. If that doesn’t work out, the group calls in its regional coach or an external facilitator to mediate. In almost all cases, the presence of a mediator brings resolution. In some cases, the person and the team decide on some mutual commitments and give it another go. In others, after some deliberation, the person comes to see that trust is irrevocably broken and understands it is time to leave. If no agreement can be found, as a last chance to try to settle the matter, the team members can ask Jos de Blok, the founder, to mediate; in the rare cases where even that fails, they can ask him to put an end to the person’s contract (legally, he is the only one who can do so).

Compensation was usually handled simply: set your own pay using whatever advice process the organization has adopted, which implies that compensation data is public. This worked surprisingly well for those surveyed.

A common theme throughout companies was a cultivation of mindfulness. For example, Sounds True trained all employees and clients in meditation during their onboarding, started each day with 15 minutes of practice, and started each meeting with a one minute silence. This coupled with training in techniques such as Non-Violent Communication served as a foundation for productive and compassionate conflict.

Holacracy is not much talked about in this book, but is what most people think of when they hear self-management. And the popular impression isn’t positive: in a post announcing they were moving away from Holacracy, Andy Doyle from Medium acknowledged that popular perception of the practice had hurt their ability to attract people:

Holacracy has become fraught with misconceptions that make it hard to separate the actual system from the imagined one. In recruiting, this became a problem—particularly among more experienced candidates, who worried that they were being hired as “bosses” in a boss-less company.

This strikes me as similar to what happened when the Manifesto for Agile Software Development transformed into Agile-with-a-capital-A: industrialization of the concept led to a popular misunderstanding of the principles. Dave Thomas, one of the authors of the manifesto, writes in Agile is Dead:

Forming an industry group around the four values always struck me as creating a trade union for people who breathe. […] The word “agile” has been subverted to the point where it is effectively meaningless, and what passes for an agile community seems to be largely an arena for consultants and vendors to hawk services and products.

Holacracy may provide a useful system of processes for self-management, particularly at larger organizations with longer value chains, but as with any “Agile practices” they would need to be selectively applied with an understanding of their foundational principles to be effective.

Finding the right people seems critical. Not everyone is willing or able to work in this kind of environment.

There are currently 250 nurses joining Buurtzorg every month and 25 that leave each month, once they have been there for a while and realize it wasn’t meant to be. Almost always, the departure happens by mutual consent, on a friendly basis.

In particular, senior people from traditional organizations seem to have a harder time, since they lose most of the management tools and power that historically enabled them to be effective.

I’m curious what effect this extra filter has on the diversity of teams. I can see good theoretical arguments both ways: a focus on compassion and self-awareness should lead to being able to include a wider variety of people, but the inherent difficultly in conflict resolution could also lead teams to hire people “just like them” since they know they can get along. This topic wasn’t addressed in the book, though it did give examples of people coming together to identify and address structural “isms” (race, sex, age, etc…) in their workplaces.

While not directly addressing failure, Laloux does identify a critical condition for success: board, owner, and founder buy-in. Any attempt at self-management he surveyed within a company that did not have the support of the owners ended in failure. This point is particularly relevant when considering VC investment, and the strong incentives that creates to manage to the bottom line.

Can a middle manager put [these] practices in place for the department he is responsible for? When I am asked this question, as much as I would like to believe the opposite, I tell people not to waste their energy trying. Experience shows that efforts to bring [self-managing] practices into subsets of organizations bear fruit, at best, only for a short while.

This book was primarily a survey of how self-managing organizations succeed. I would also like the counterpart: how they fail. While there are clearly some common practices among successful companies, it still feels to me that there are few enough of them that they could be flukes of survivor bias. (Laloux is self-aware of this possibility.) Though a depressing thought, it may be that creating a successful self-managing organization requires such an extreme degree of effort and luck that attempting to do so would not be rational.

No matter how much we try to fight against it with culture, hierarchical management structures are fundamentally dehumanizing and disempowering. Idealistic as it may be, this book shows that at least in some cases, a better world is possible. If even just for that, it’s worth your consideration.