I’m three beers in so now seems as good a time as any to write up a race report.

Let me start with this: Bend is fucking beautiful. 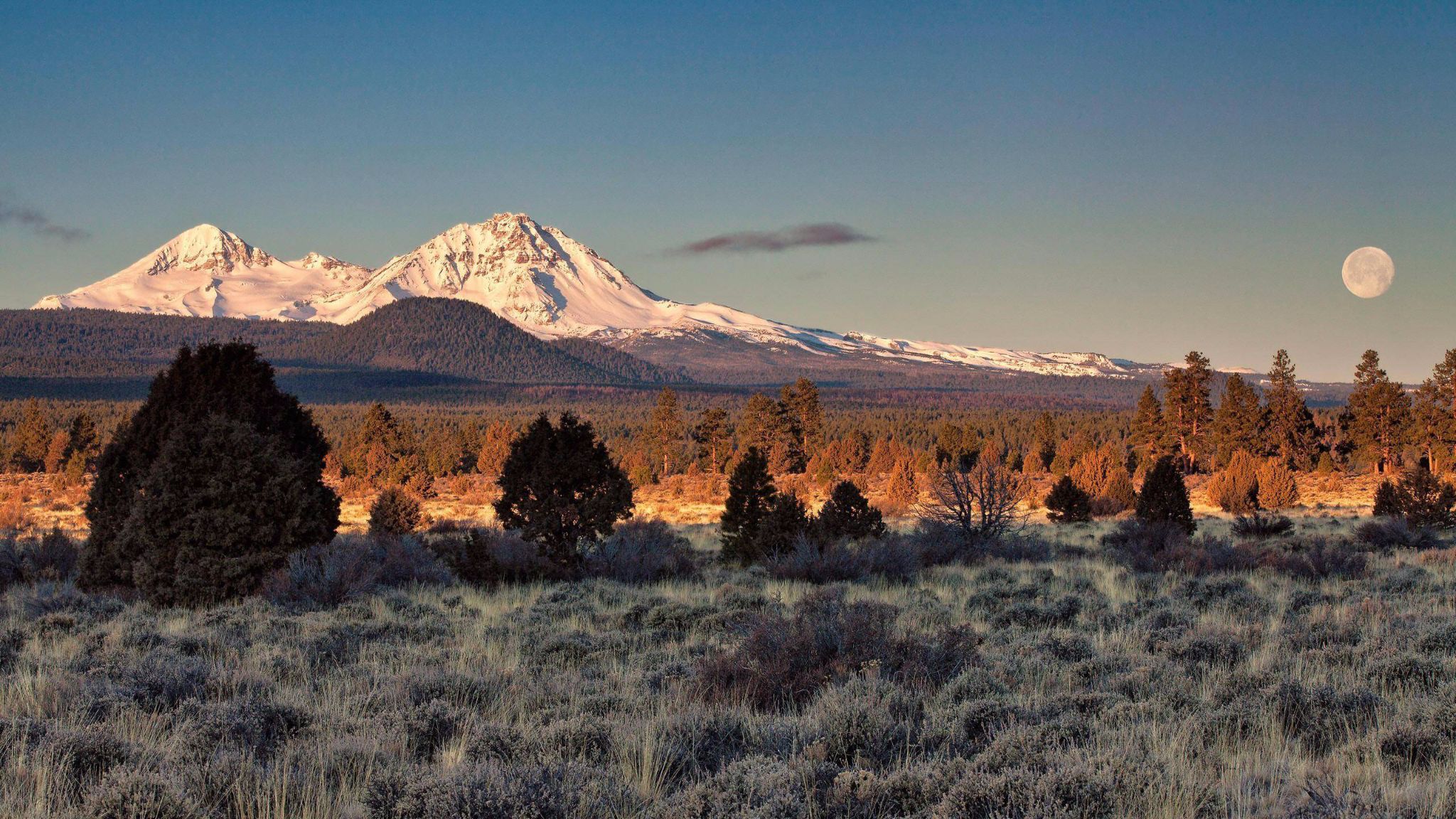 Look at that mountain. Look at it.

We flew in yesterday, eight of us, predominantly expatriated Australians. The house we’re staying in is located half way up the hill around two miles from the start. It has a hot tub. Thanks, airbnb!

Pre-race dinner was going to be out, but in addition to all the runners it was also PROM NIGHT and everywhere was packed out. Safeway, pasta, late dinner at home. Could be worse.

We rose with the sun at 6:15am. The weather forecast put us bang on freezing, but with no wind and a clear sky the best adjective would be “brisk”. Or: perfect running weather. Minor panic when a bowel movement was slow in arriving, but consensus seemed to be warm water and a belly rub would sort it out. Seemed to work.

Down at the start we snapped our first pic of the runners. 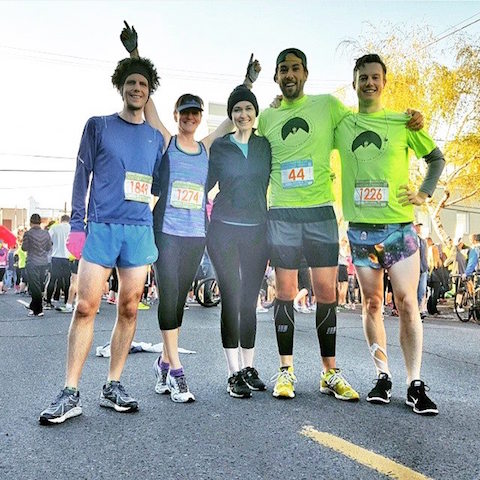 You’ll recognize me on the right from the sensible ear warming headband and high viz (i.e. pink) gloves. To my left is Jodie, the missus, running her first big race. Then Meg in the middle, who hasn’t run one in a while but is excited to be back at it. She’s lucky enough to have snagged Ned, who’s sporting the best shorts in the galaxy there on the right. Number 44 Nick missed the registration cutoff for the half a few weeks back, so he’s the only one running the full. He knocked over a 30K last weekend so he should be fine.

I had plenty of time for a good warmup, before sauntering back to the start line. This is the inaugral race in Bend, so it was relatively small: I ran four seconds off the line. This was my first race after getting back on the wagon, and I had a simple goal: run a comfortable 93 minutes (4:25/km). I’m shooting for sub-90 later in the year, and if I hit this I’m well on my way. I typically go out too fast, so hopefully this was to be an exercise in restraint and pacing.

The course starts off mostly downhill, but I managed to keep things reasonable. A few rises and dips, but nothing outrageous. At 3K we hopped off the road and picked up a nice gentle trail around the river. The first surprise came at the 6K mark: turning the corner straight into a 12% climb. It was short, but the recovery over the back was the same grade down, which the quads weren’t any happier about.

Now it feels more like a tempo run, but with math. Can I make up enough on the downhill to cover first gear up the hills?

Though the elevation continued to drop through the 10K mark, all the bumps made it hard to take advantage. Whenever I felt like I’d recovered enough to stride out again we hit another incline. I managed to keep on pace, but it cost me more than I would have liked. I was beginning to suspect maybe the course was just one big climb.

Which of course, from the half-way mark is exactly what it became. The third quarter of the race was actually what the first half felt like: a gradual incline that never really seemed to end. I was neck and neck with another guy which helped get me up, but I still dropped five seconds a kay.

Between the cold and potential altitude effect (is 3000ft high enough to have a noticeable impact? Or is that just the cold?), I wasn’t sure how to evaluate my state. My breathing was heavy but still comfortable enough, and my legs still seemed to have plenty in them. I didn’t want to risk pushing it though: I’d only lost 30 seconds in the last section and had probably made that up being ever so slightly fast on the start.

The course then caught up with the river and flattened out, and that’s when I knew I’d made it. I got back on pace, dropped the guy I’d been climbing with, and was feeling good. Some quick math put me at between a 93 and 94 minute finish – not bad considering I hadn’t factored in the hills in my initial goal.

There was another short climb heading into 19K which I breezed over, then settled in for the finish. The course was basically a figure 8, so we’d run past the finish already at 5K and knew what to expect: come around the river, a 100m medium uphill, tight corner, then straight over the mat. Still, it came as a surprise: my watch had me a few hundred metres back. With about half a click to go I put my game face on, dropped the hammer, leant into the corner to thousands of screaming fans (… well someone’s grandma at least) and sailed through the line …. 30 seconds under my target! And a tidy PR.

Had to take a bit of a sit down but otherwise was feeling fine. Post-race swag included a chunky medal, a wooden beer coupon, and … three screws. Ok, whatever. Oregon I guess.

Quick cool down, then back to the finish to cheer in Jodie. If I were a better friend I would have cheered Ned in – 1:50:09 for a PR – but honestly I was too anxious about Jodie so I forgot. Sorry Ned, you’re still cool though.

Jodie’s game plan was to stick with the two hour pacer, which I’d been pushing her to do for a while but was actually pretty ambitious. Running over the hills myself, I thought: too ambitious?

The pacer came around and paused at the bottom of the hill to shepherd everyone up. No Jodie! Oh well, first race, it’s just about the finish.

Barely a minute later Jodie comes rolling up the hill. I threw up both hands to celebrate and almost dragged her off course. No! No! Around the corner! Go! She crashes over the line in clock time of 2:01 and change. Actual running time: 1:59:40. Smashed it.

Turns out she missed the gun (“oh, no line for the porta-potties!”), was last over the start, and spent the whole race trying to find the pacer. So pro-tip if you want to nail your first race, I guess.

Meg came rolling in not long after.

Quick trip back to the house for a shower, then back to cheer Nick over the finish line. New-comer Dan (not pictured) ran in reverse to pick him up and pace him home over the last 5. We settled in for a post-race beer.

Just over 4 hours Nick comes barreling up the path. No Dan? Nope, there he his, running his legs off to catch up! Nick dropped him on the final stretch. Guts, son. Guts.

Sian and Jason (you haven’t met them yet) weren’t running. Sian is a physiotherapist. A physiotherapist who picked up a twenty pound pack of ice on her way home. Ice baths for all! Even Jason, who didn’t have a particularly good reason for doing so. He used to do them in garbage cans back in college, true story. Sian: “don’t count, listen to me: name three things you’re grateful for.” Well I was grateful for being able to feel my feet at one point.

And those screws? For mounting your medal on the wall. It doubles as a bottle opener. 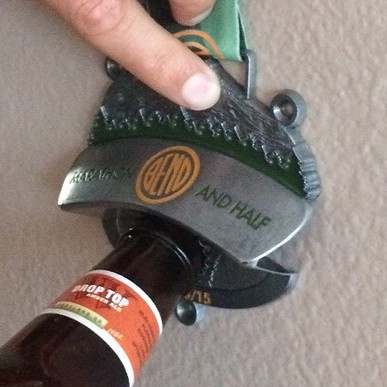