Janesville was proudly the site of GM’s oldest car factory, until it shut down in 2008. Janesville: An American Story follows a number of citizens of Janesville through the following years as the town and its people try to reinvent themselves. 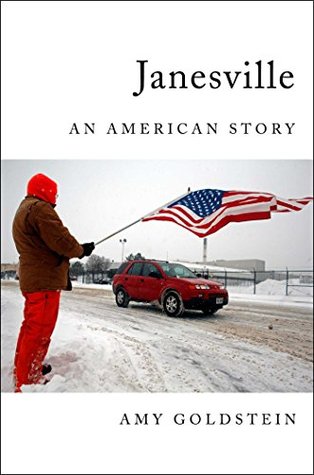 I’ve read similar books (The Unwinding), so I knew what was coming, but I couldn’t put this down. It hit me in the same kind of way Grapes of Wrath did. The writing is fantastic, and skillfully portrays a number of very human encounters. Take this sample, where after a long family legacy of working in the union Mike finally tells his dad he’s retraining to work in HR:

As he is talking, he keeps a close watch on his father’s expression. Is that a flicker of sadness? Yes, it’s there. But if his dad’s long, grooved face betrays certain feelings, his words don’t say what Mike has feared the most: that Mike was going over to the dark side. No, the old union leader tells the young union leader he is proud of him for taking this opportunity to better himself. Then his father wraps him, the last generation of the union Vaughns, in a hug.

I was suprised by some of the research presented showing that retraining didn’t work. This is particularly troubling since it’s a policy option that is typically supported by both liberals and conservatives.

The evidence is thin that job training in the United States is an effective way to lead laid-off workers back into solid employment. […] By this summer, the people who have found a new job without retraining are being paid, on average, about 8 percent less than they were paid before. But those who went to Blackhawk [local community college] are being paid, on average, one third less than before.

Underlying the book is a central question: what does it mean to “bring jobs” to an area? This period saw the election of Scott Walker, who proceeded to gut the public sector union in order to (allegedly) bring down wages and enable people to stay employed. This is similar to the tack taken by Paul Ryan, a Janesville native. People rehired in non-union jobs usually ended up on half what they were making previously—and needed to accept aid just to feed their families. There is a tension here between the values of a strong union town that also needs to supplicate to companies to keep their jobs: Winsconsin put together an incentive package worth $195 million for GM to try and save jobs, but are ultimately beaten by Michigan whose incentives were close to $1B(!) These are the same incentives people decry when “big companies don’t pay taxes”: it’s cities trying to save themselves.

Janesville is an excellent piece of extended journalism and is well worth your time.