In 1974 Ernő Rubik accidentally invented a puzzle he couldn’t solve. It took him a month of tinkering to unscramble the first Rubik’s Cube. Which is to say, it’s a pretty difficult puzzle to figure out on your own. Most people don’t. I didn’t. The fun starts when you start trying to solve it faster.

This is a Rubik’s Cube. 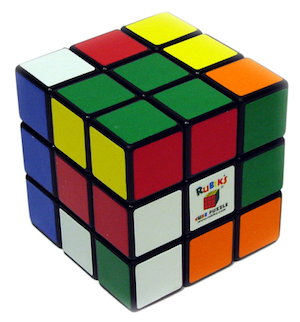 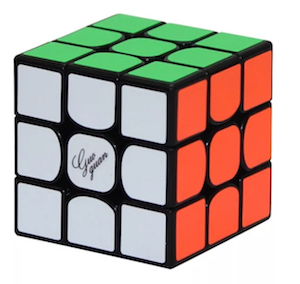 You could be forgiven for mistaking the two. The Rubik’s patents expired in 2000, and the subsequent copies have surpassed the original in quality and manufacture. They each have a distinct feel, but anything listed on bestspeedcubes.com is going to work well.

The appropriately named how-to-solve-a-rubix-cube.com is the best way to learn. It has clear diagrams, a nice summary, and even works on mobile! You should be able to get under three minutes pretty comfortably using this beginner’s technique. I learned one step a day, so had it down within a week.

The first layer of the cube can be solved intuitively, meaning no moves need to be memorized. Doing this gives you a feel for how the cubies move around. A memorized series of moves, used for the final sections, is known as an algorithm. For this beginners method, you do need to memorize a handful of algorithms, but for the most part they are pretty straightforward patterns.

At this point, it’s also worth learning how to best hold and rotate the cube using your fingers, rather than moving your entire hand for each rotation.

The most common method of solving a cube today is known as either CFOP, or the Fridrich method. It starts the same as the beginner method above, by forming the white cross. Why white? Convention. A few of the top cubers today are colour neutral, meaning they can start with any colour, but most start with white even at the elite level.

After the cross, CFOP proceeds to solve the remainder of the first two layers (F2L) at the same time. This can be done intuitively! This video provides a very clear explanation and demonstration:

After solving F2L, you can use the same algoritms from the beginner technique to complete. The CFOP method provides a different strategy though, first solving the yellow face (orienting the last layer, or OLL), and then rearranging the remaining pieces (permuting the last layer, or PLL). In total, this can be done efficiently with 78 different algorithms(!)

I haven’t learned all of them though. Instead, I’m currently on two-look OLL and beginner two-look PLL which can be done with 9 and 2 algorithms respectively.

My current average solve time is around 75 seconds, using cubetimer.com to scramble and measure. Learning a few more algorithms for a faster two-look PLL is next on my list. Putting it all together it could eventually look something like this: