Dad and I ran the inaugural Great Southern Stage Race together along the south coast of Western Australia, with Mum crewing. I covered 200K over 3 days of running, my longest ever effort. 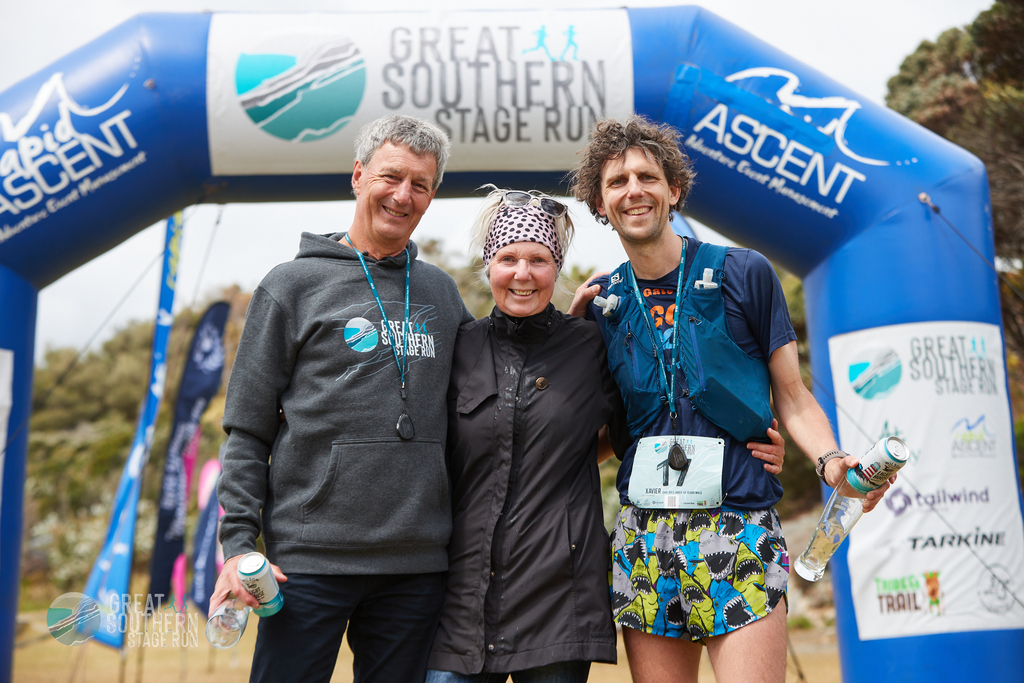 I worked with Tim at The Distance Collective who was fantastic. My training goal was just to finish, and after an injury during the year was downgraded to “get to the start line”.

Initially I planned to use the Alpine 100K in April as a qualifying race, but I herniated a disk in my back (unrelated to running) which resulted in zero running and a lot of hobbling from March until the end of June. I started a really slow build in July, averaging 25K/week that month. My first 60 minute run was on August 7th, immediately followed by two weeks off due to a stomach bug. My first long run (16K in 1:15) was August 28th, capping a 45K week.

From there I started a 12 week build into the race, and thankfully had no further injury trouble. Ideally I would have run the Surf Coast Century to qualify on September 17th but I was nowhere near fit enough yet – instead I asked for (and received) an exemption based on prior year performances. I peaked a month out with a 100K week mid-October, then tapered into the race.

My schedule was generally back to back runs on the weekend (either a longer workout and long run or two long runs), recovery Monday, a workout Tuesday morning with Hunter Athletics, medium run with my trail club Thursday evening, with Wednesday and Friday as rest days. I was also doing back rehab daily throughout. Stand out runs include:

Overall my training was sub-optimal. I would have loved another cycle or two and some proper intermediary races, but I feel I made the most of what I was able to do given my injury.

The race starts at Walpole, which was relatively difficult to get to, particularly since I was meeting my parents there so travelling solo. Flew Melbourne to Perth (delayed), collected baggage and connector bus to terminal 3 (practically a different suburb), regional flight in a tiny twin prop Perth to Albany (also delayed), then caught a $250 taxi to Walpole, arriving at 8pm the night before the race. Missed check-in, race briefing, and gear check, but managed to make alternate arrangements.

Should have flown a day earlier, if only to reduce risk and stress of not getting there on time, and to be able to check-in properly. There is a once a day bus from Albany to Walpole but I’m not sure that would have been much cheaper after factoring in an extra night of accommodation plus taxi from the airport. I would expect most people to be travelling with their crew and so to have a hire car to work with, which would be much easier.

For the race we stayed in the recommended accommodation. The night before and first night of the race was a cabin in Walpole at Coalmine Beach Caravan Park. The final two nights were a cabin at Camp Kennedy, which was the finish for day 2 and start of day 3. Pretty sparse, but we were only sleeping there and it was exceptionally nice to finish 100m from my bed on day 2! The shared mess hall at Kennedy was also a good time.

This was the first event I’ve been to that provided good plant-based options at every catered meal. Very impressive.

The way back was a five hour drive to Perth with the folks to return their hire care, then a flight back to Melbourne which got me home at 2am. Clearly a bit late but meant we didn’t need to rush off in the morning and were able to detour through Perth city for a sensational lunch at The Standard.

Began with a loop of the Valley of the Giants Tree Top Walk. We weren’t allowed to run this section, but it was only a mile and would have been very unpleasant running anyway given how much it swayed. Very pretty. 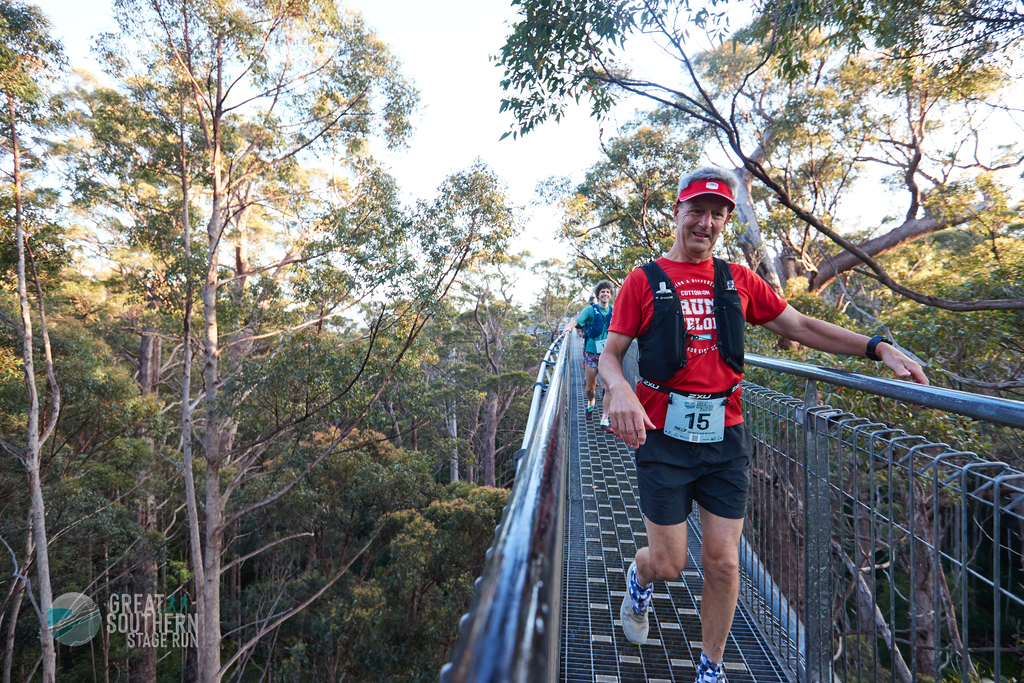 Took literally the first possible wrong turn, following a group down a fire trail rather than continuing straight along the track. Went half a mile mostly downhill before realising and retracing steps. Net result: first mile of race covered in 30 minutes. Got much better at checking my map and not trusting the herd after that! 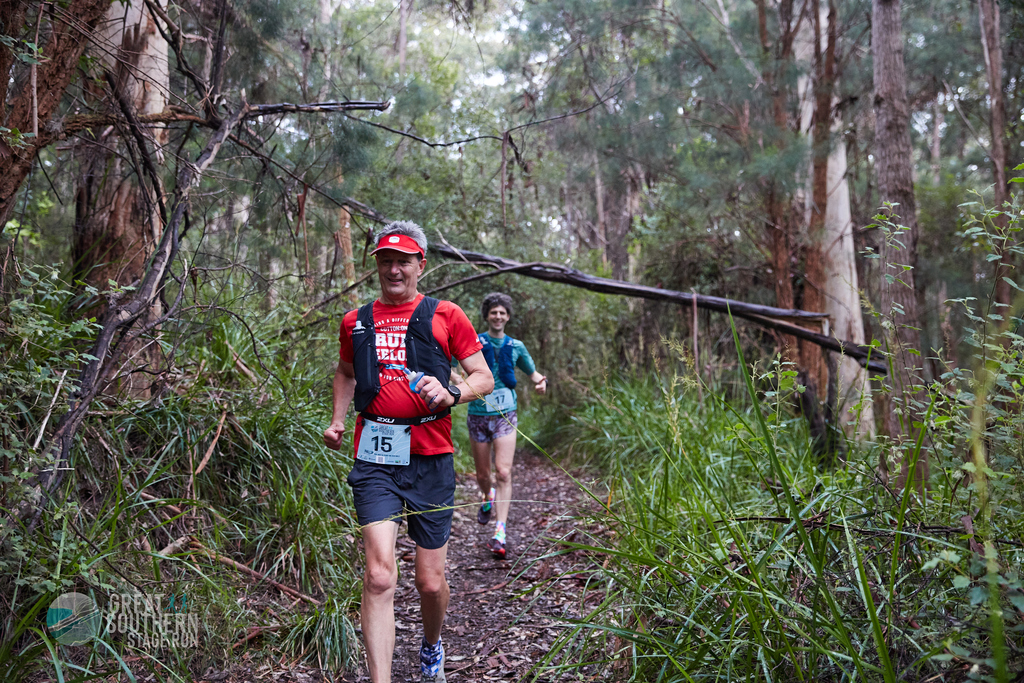 Had to run back through the sweeper along pretty runnable track to arrive at the first checkpoint 10 minutes before cutoff. (I think they retroactively extended this cutoff, it was pretty aggressive.)

Leg two was a lot of soft sand and rock hopping. This was not good for Dad’s knee. As a result we had to hike most of leg three, which was somewhat sandy and undulating single track. It also included a canoe crossing! 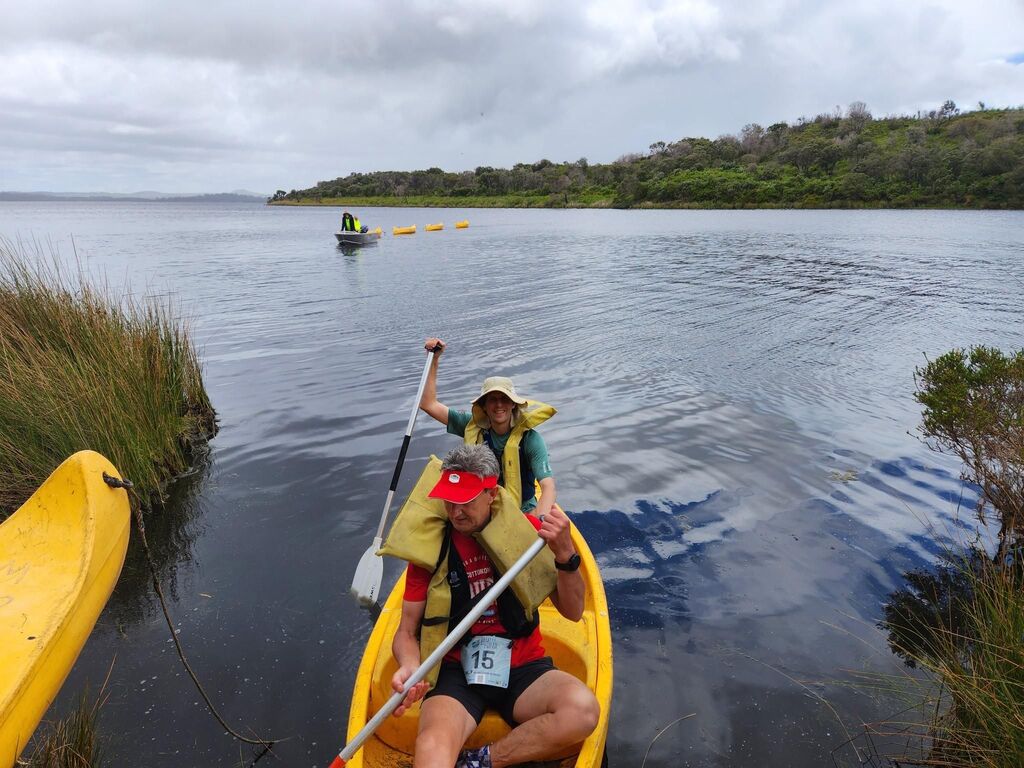 The final leg was similar and Dad’s knee hadn’t improved so we hiked the whole thing. Spectacular short rock hop section just before the end.

Can’t quite believe we finished.

Beach running then some asphalt single track, quite pleasant. Dad can’t run downhill but there isn’t too much of that. 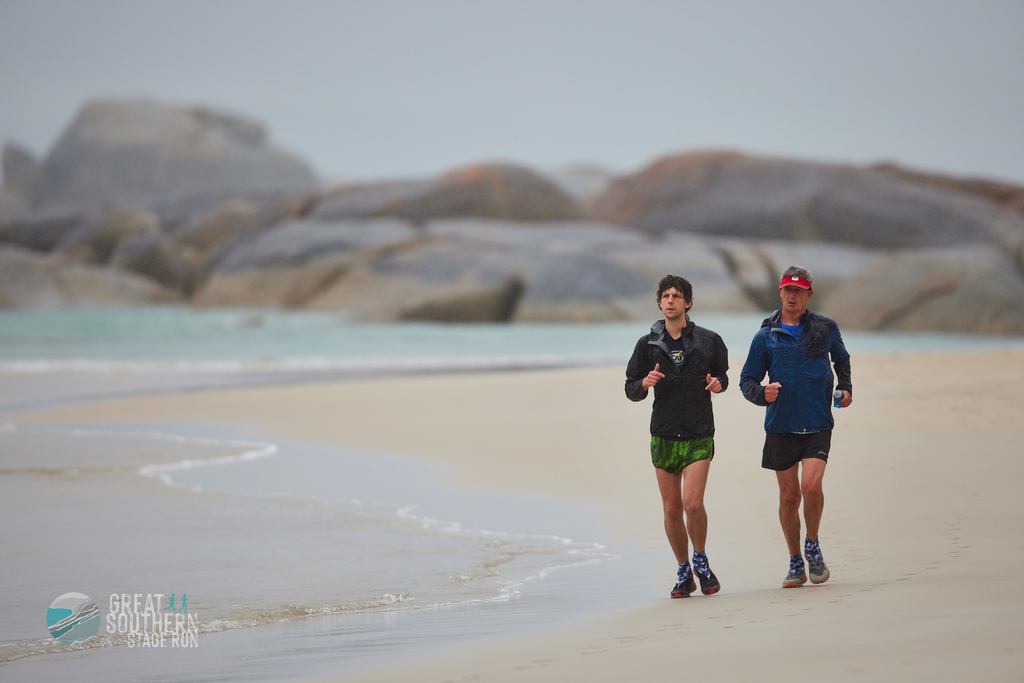 Second leg climbed over Mt Halowell, but was pretty tame as these things go. We did have to hike the downhill though. 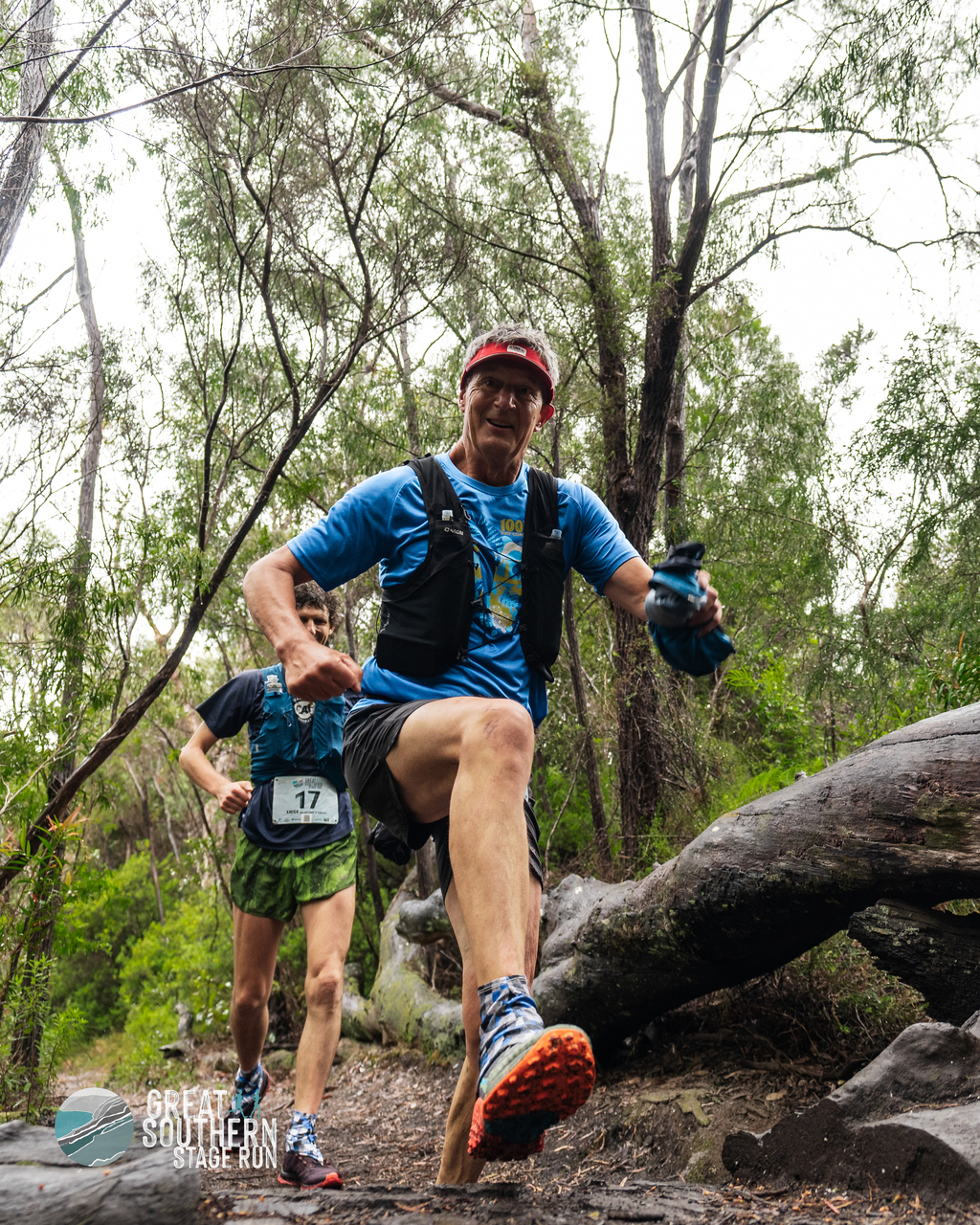 Started pouring rain right towards the end as we came into the checkpoint, which was supposed to then be a ferry ride (with clock stopped) across the inlet. Waited in the rain for a while for the ferry to arrive, but then it could only take five people and we were 15th in line. Got permission from race director to drive around instead, a 35 minute trip which was a good opportunity to dry out and fuel up. We learned later that the next ferry started taking on water and had to call for assistance, so a lot of people ended up driving around. In total the clock was stopped for an hour before we started leg three. 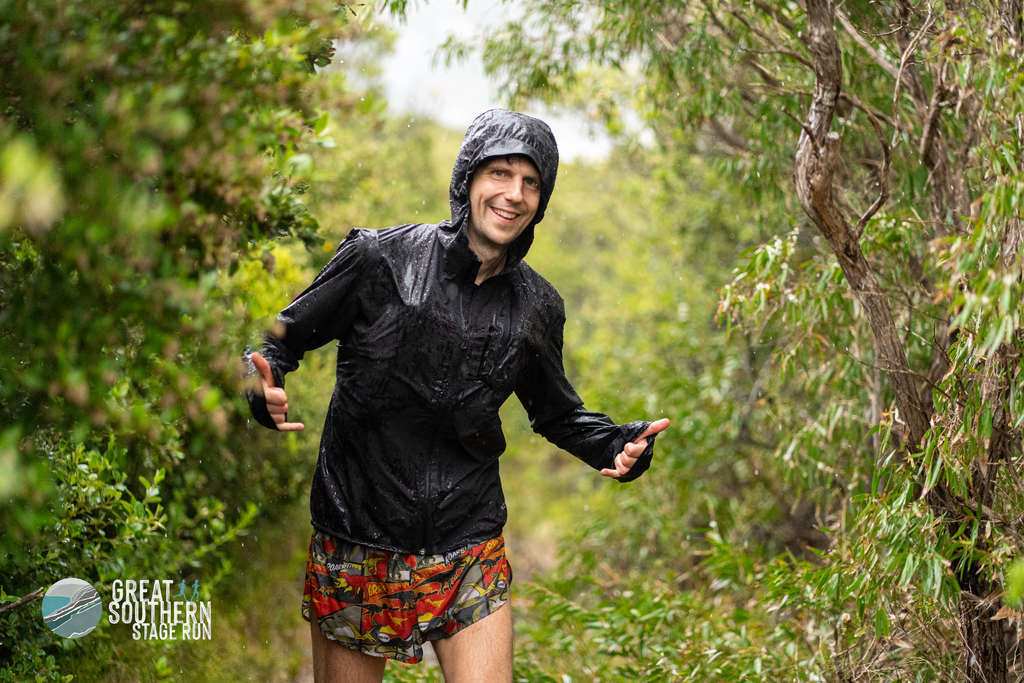 Began along a flat track along the water’s edge. Developed a problem with my left achilles, could run flat and down ok but could only hobble up inclines. I suspect this was a combination of a pressure point from my shoe and not having trained for the amount of hiking we had been doing. Comically, I couldn’t run up hills and dad couldn’t run down them! We started rubber banding. Very tough leg.

Next checkpoint was at the bottom of a hill so I got in first and took some extra rest. Taking shoes off relieved pressure on achilles and gave me confidence it was going to be manageable. 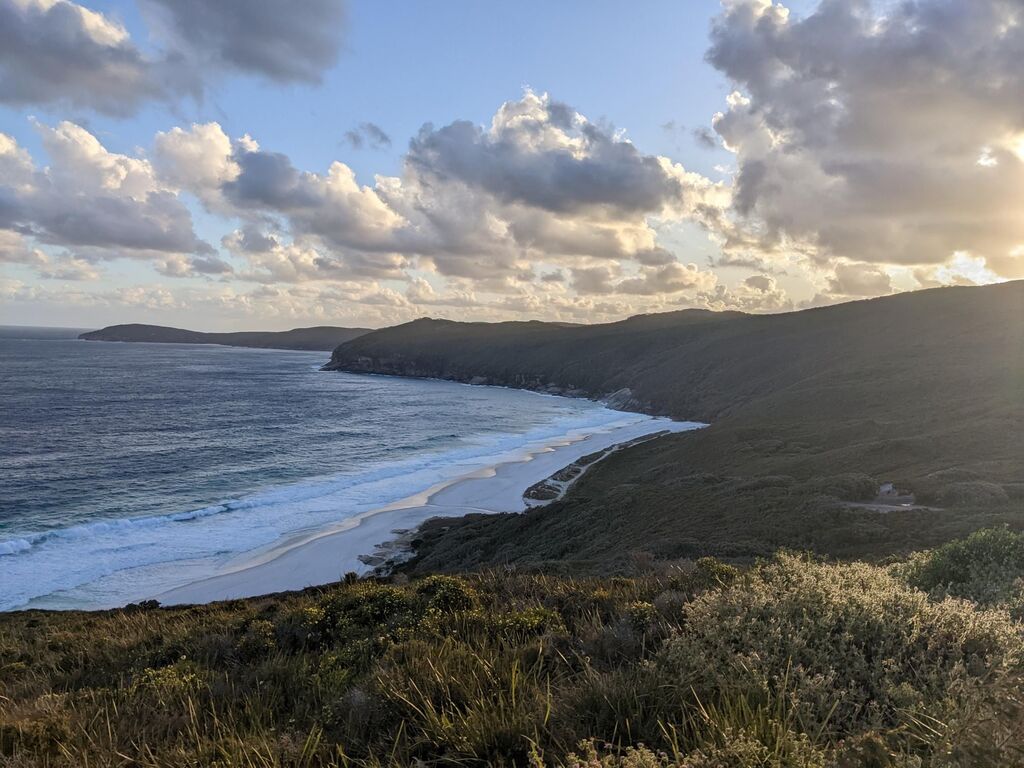 The final leg was the longest of the whole race and we hiked the whole thing. Massive grind. Got in 10 minutes before the 13h cutoff.

Very difficult day. Unsure whether we’ll get to the start line tomorrow.

Handicap start but we choose to go with the earliest wave. Dad intends to hike the entire day and not even try to run, his knee is cooked. I can’t walk because of achilles, limped to start line. Running is ok though. We decide to run our own races today.

Slow but consistent shuffling along the beach to start, then some absolutely garbage soft sand 4WD track which nevertheless I was still moving through ok. Lovely single track after that, and felt strong coming into first checkpoint. Achilles had loosed up a bit. 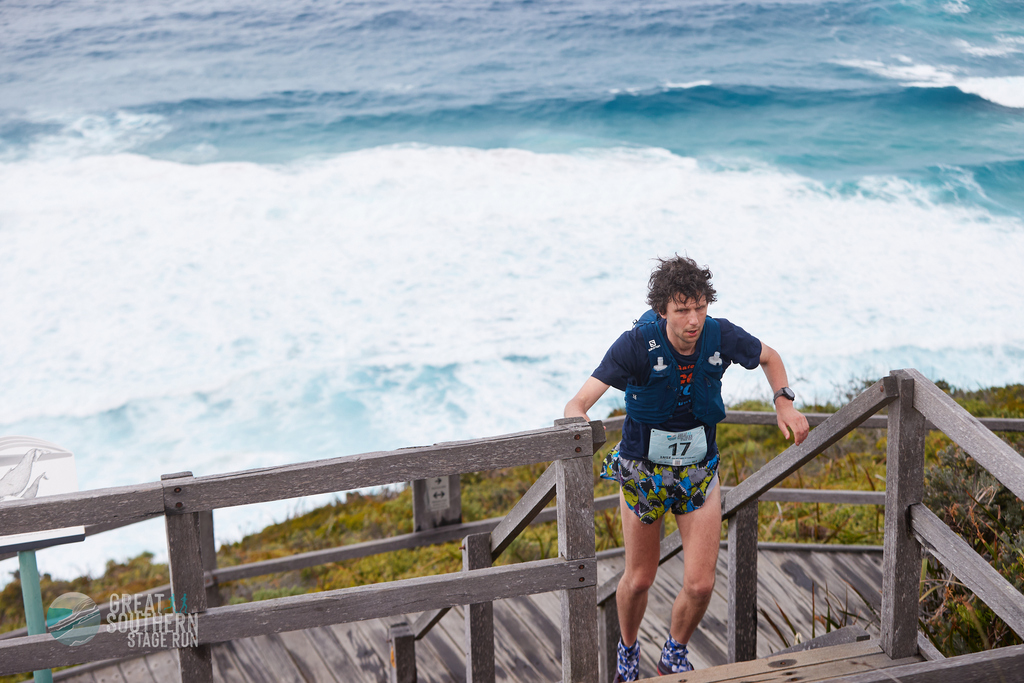 Leg two wasn’t that difficult terrain wise – good single track to start then road to finish – but I found it pretty tough. Focused on keeping a shuffle going. 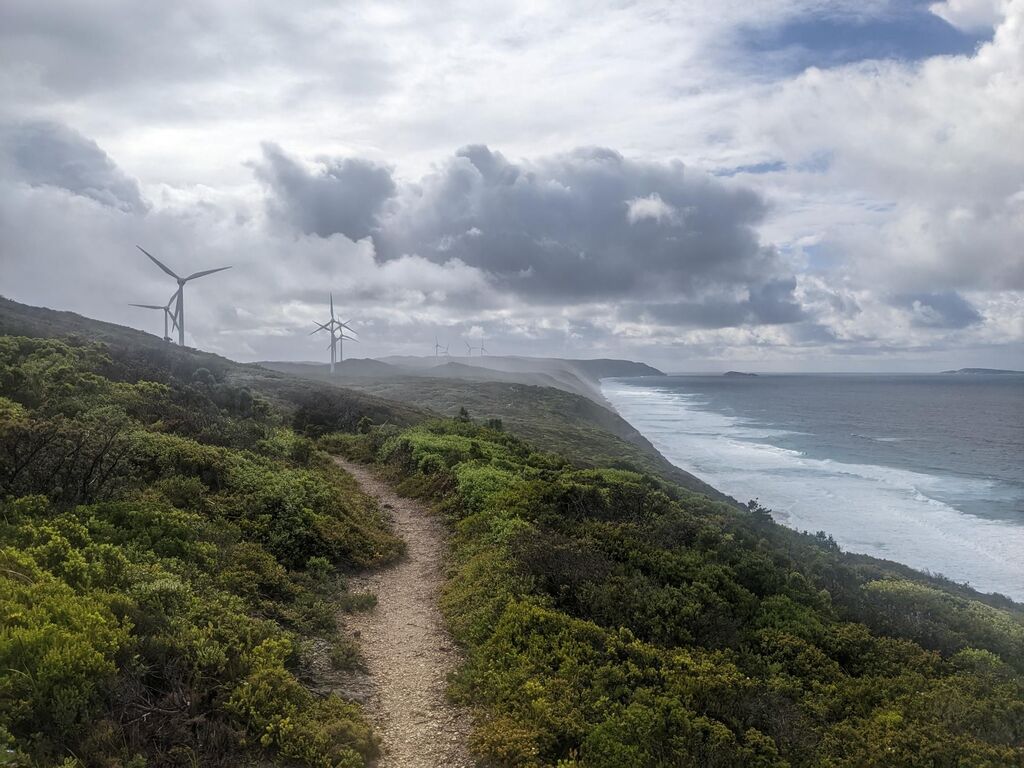 Learned later that Dad had to drop just before second checkpoint, the sandy descent coming into it wrecked him. Superhuman getting this far I reckon.

Leg three was primarily on road and felt better and better as it progressed. The final section was phenomenal beach combined with an outrageous rock scramble which gave the legs something different. Feeling great coming into final checkpoint. 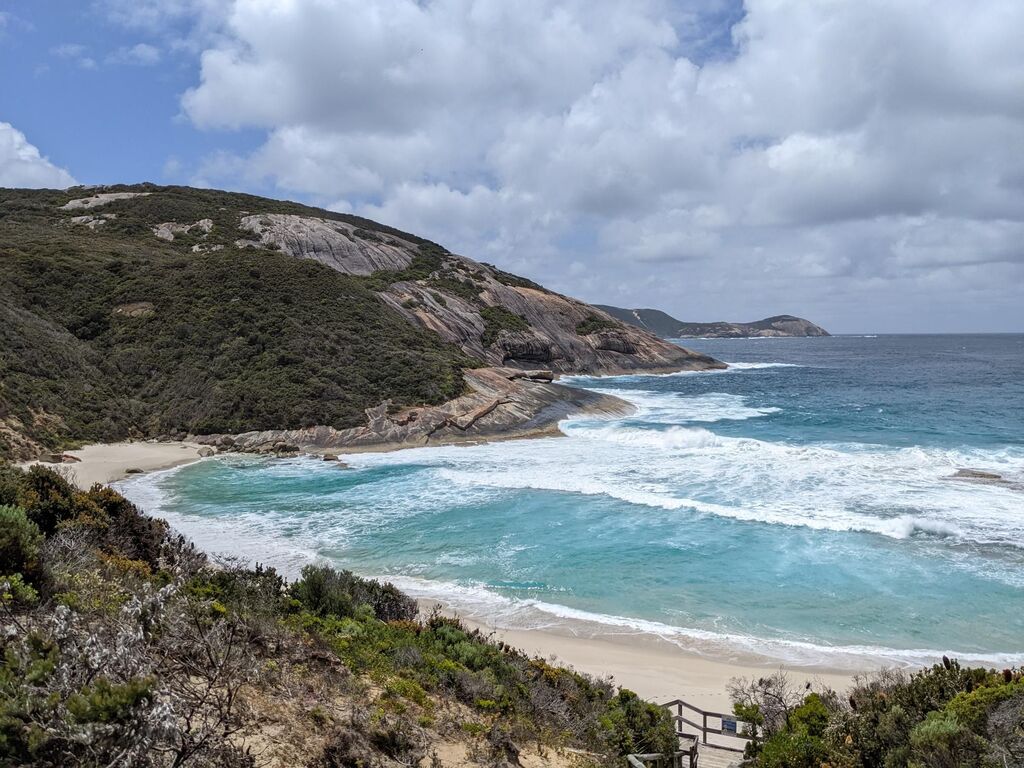 Final leg was a short one (only 10K) and I felt really good. Lot of beach running but mostly found firm sand. Dropped my fastest kilometer for the whole race, a 5:56 along a flat kay 51. Finished shockingly with more still in the tank. 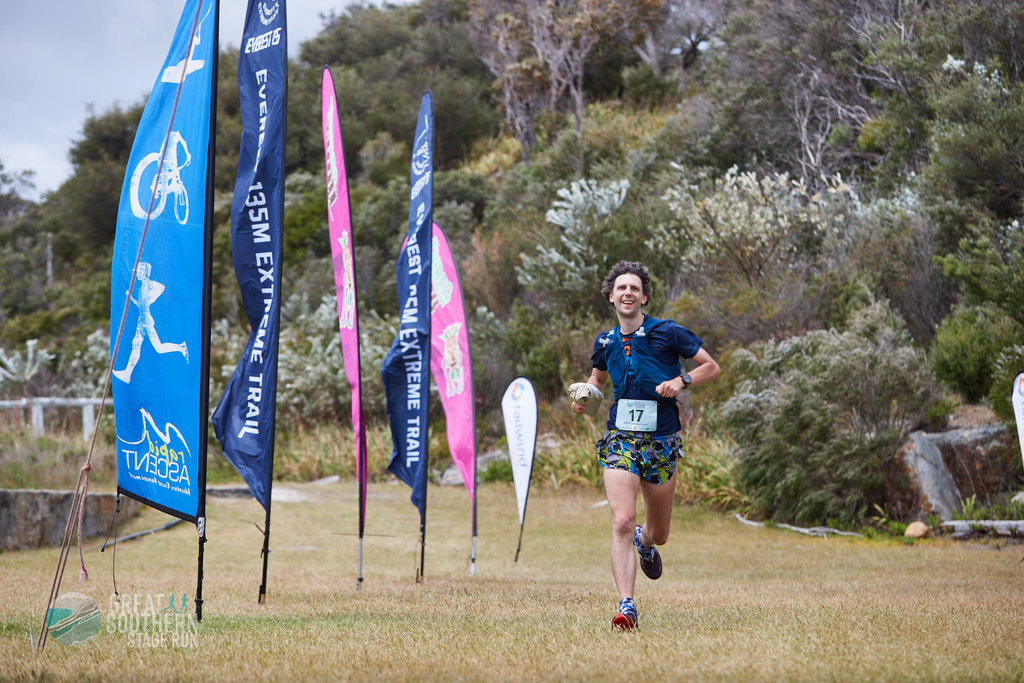 Today I felt my training paid off. I pushed through some difficult moments, fueled well, and ultimately finished strong and still running. 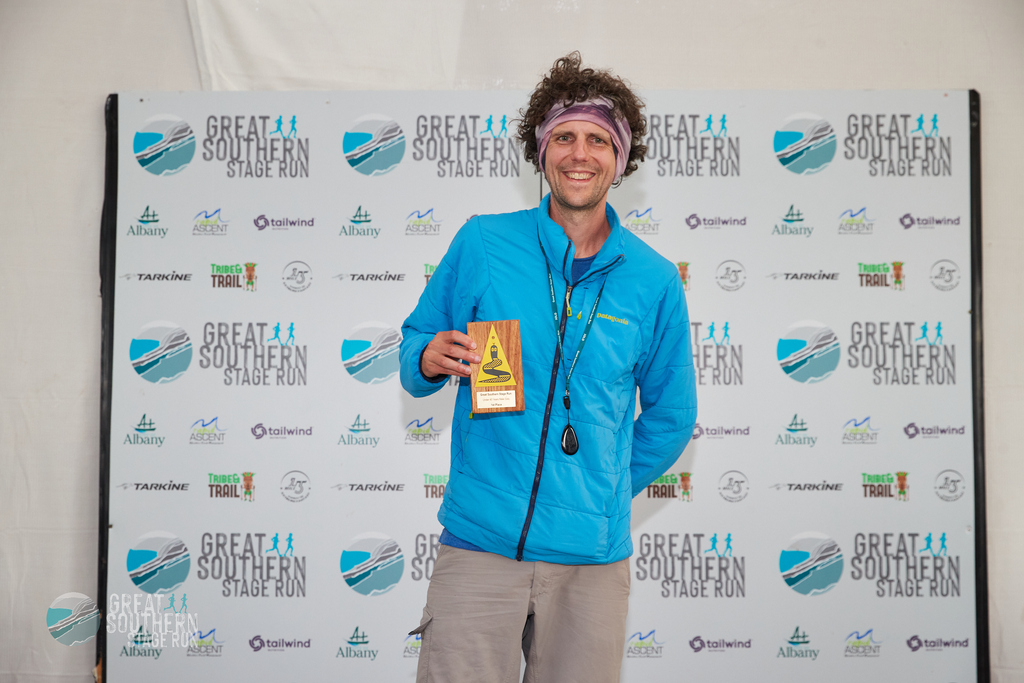 … as the only competitor. Sometimes you don’t have to be good, just stupid enough to enter an event no one else will, and stubborn enough to hold on. Absolutely stoked to have made it to the finish line, particularly with such an injury-laden year. Won a pair of shoes, not too shabby.

Was over-hydrated on the first two days, don’t need as much liquid when hiking apparently. Otherwise felt pretty good and consistent.

It’s a bit misleading to call this a “solo” race, with so many people supporting.

Tim, thanks for the patience and revisions in my coaching program. I don’t think I could have programmed a recovery for this by myself.

Jodie, for always letting me take the car on weekends. (And the rest.)

Dad, it was truly an honour to be able to run with you. There aren’t many people who get to share a hobby like this with their Dad. I’m grateful every single time we are able to run together. The depth of courage you displayed getting as far you did was inspirational.

Mum, this absolutely could not have happened without you. You’re an absolute superstar. The amount of standing around in the rain for us you did is far beyond anything I could ever expect of anyone. Truly grateful, you’re the best Mum I could possibly wish for. 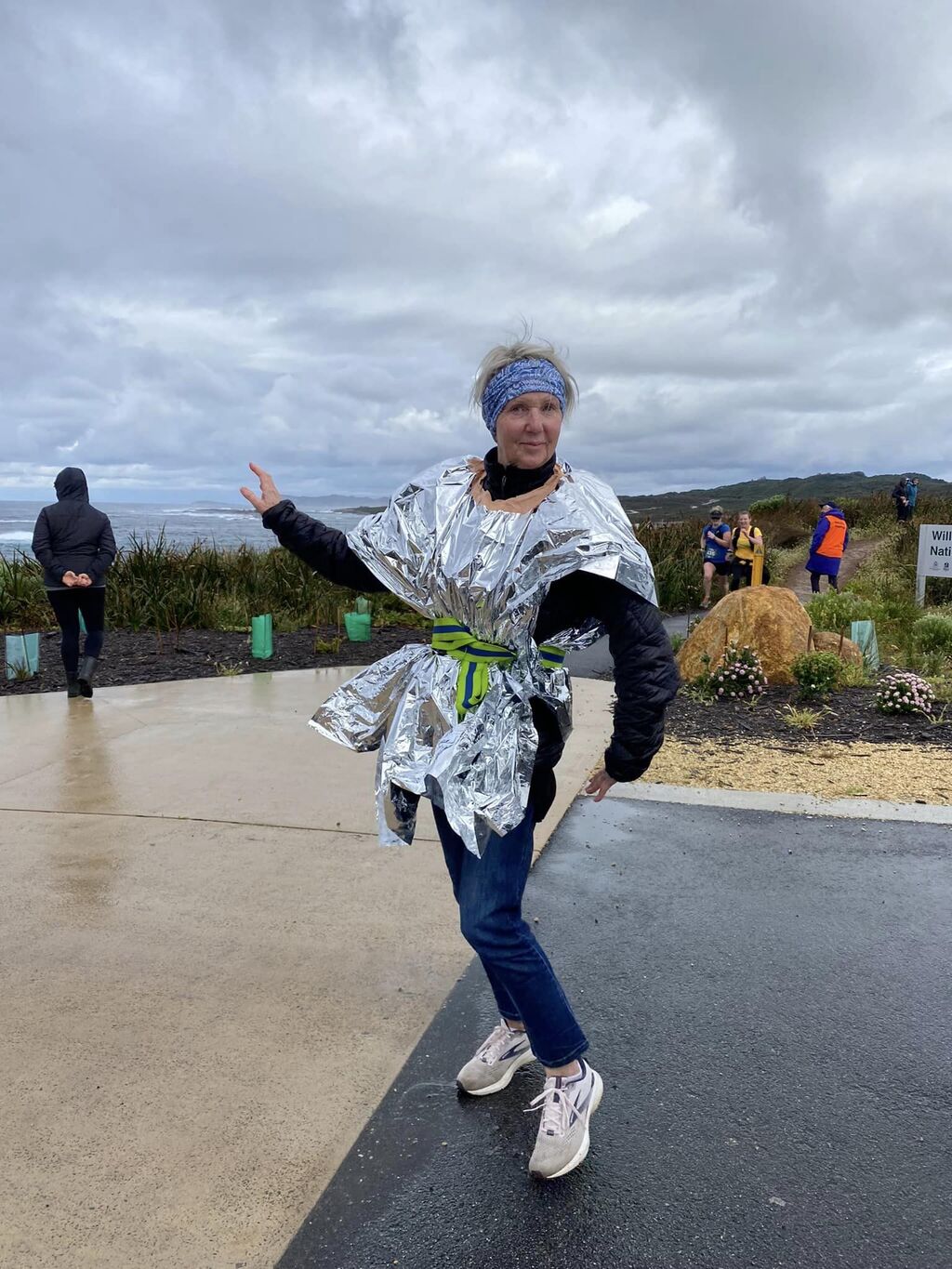